From July to September 2013, the New Museum hosted XFR STN, an exhibit that one observer described as an “attempt to digitize, present, and preserve artistic materials on obsolete formats, however obscure or unremembered.” The project was initially proposed by artist Alan W. Moore, the co-founder of the Monday/Wednesday/Friday Video Club (MWF) — a group that distributed independent film and video made by artist collective Collaborate Projects, Inc. (COLAB) and other filmmakers from 1986-2000. COLAB artists Coleen Fitzgibbon, Andrea Callard, Alexis Bhagat,  Taylor Moore, and others worked together with Johanna Burton (Keith Haring Director and Curator of Education and Public Engagement) and museum staff (Tara Hart, Jen Song, and Ben Fino-Radin) on planning, programming, and creating a vibrant and productive social work space within the museum. Moving image archivists Walter Forsberg, Rebecca Fraimow, and Kristin MacDonough were also hired for the exhibition.

For more information about XFR STN read the exhibition-related broadside, or this or this article. Material digitized by XFR STN is available on its collection page on the Internet Archive. 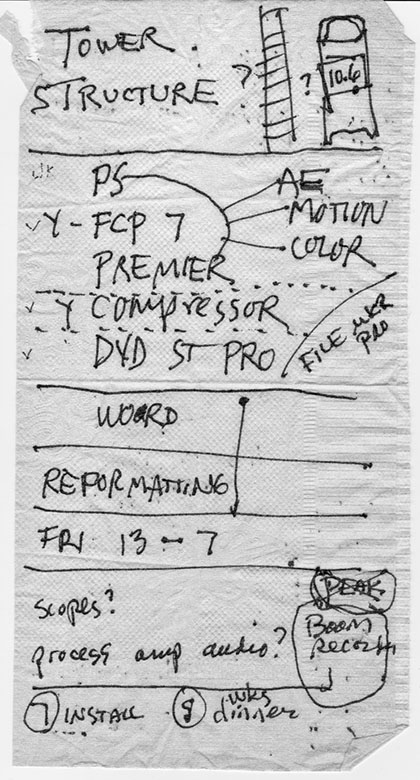 At the close of the eight-week exhibit, Walter Forsberg, the lab manager for the XFR STN, suggested to Andrea Callard the idea of keeping the equipment and hardware together in a non-institutional space, ie, in her studio. Joining in, Kristin MacDonough and Rebecca Fraimow felt that it would be necessary and interesting to continue digitizing artists’ media on obsolete formats after XFR STN. At John Klacsmann’s birthday gathering at Spain, they planned on the above pictured napkin, then ordered some new “enchantments” for an aging Mac tower. Walter, Andrea, Peter Oleksik, John Klacsmann, Fred Krughoff, Mona Jimenez, and Erik Piil loaned or located other needed items and helped with technical choices and the five floor walk-up.

They ran an initial six-month test phase to develop and troubleshoot an organizational model. During this phase, they partnered with artists and organizations in need of video tape transfers. This included Elevator Repair Service, Visual AIDS, New York Women in Film and Television, Deep Dish Television, Felicia Telsey, Cara Perlman, Alan Moore, Coleen Fitzgibbon, and COLAB.  Several presentations were given at conferences about this work, and the XFR Collective was established as a 501(c)3. 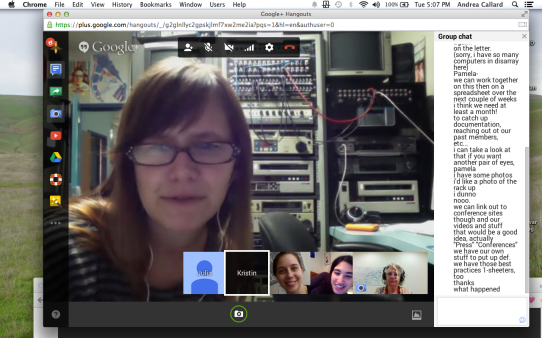 In 2015, Fraimow, MacDonough, and Kim left NYC for new jobs in other cities. New members arrived to continue the work, and the group grew in size. XFR Collective continued to transfer tapes, conduct outreach, and give presentations about its work. After a retreat in September 2015, the group expanded the organizational mission statement to reflect the full scope of our evolving work. The collective also installed a transfer station at the 2015 MIX Experimental Film Festival, digitizing tapes live during the week-long event. (See this article for more details about this residency.) Partners in this phase included the Educational Video Center (EVC) La MaMa Experimental Theatre Club,  WITNESS, and Le Petit Versailles Garden.

The collective numbers once again doubled, and the group continued to develop its model. In addition to transferring tapes, the group added new components to its digitization rack (including a Hi-8 deck and an audio monitor), and offered archival workshops for several partner organizations. Partners in this phase included Joan Jubela, the Asian American Oral History Collective, Groundswell: Oral History for Social Change, and the Great Small Works theatre group. 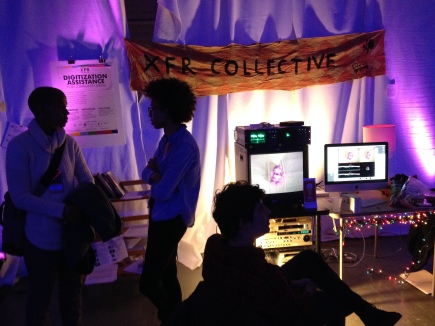 Material digitized by the XFR Collective is available for viewing and download on its collection page on the Internet Archive.